The mechanisms that cells use when they choose their fate during development of the central nervous system is the main problem under study in our lab. We have focussed our studies on the retina, a tractable model for the rest of the central nervous system. In addition, we are interested in why photoreceptor cells die in the many forms of retinal degeneration, and in developing a gene therapy that prevents their death and the subsequent loss of vision. We also enjoy developing new technologies that enable these studies as well as others.

Introduction to the retina

The retina is the thin sheet of central nervous system tissue that lines the back of the eye (Figure 1). The retinal cell types are arranged in laminae and are conserved in terms of their overall function, orderly appearance during development, and morphology (Figure 2). Most of our studies are conducted in rats, mice, and chicks. 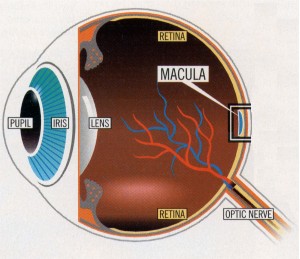 Figure 1. A drawing of a human eye is shown. The retina is the thin layer of tissue lining the eyeball (shown in yellow). An area of high acuity vision, the macula, is a feature that is particularly susceptible to degeneration, as in age related macular degeneration. The information processing that occurs in the retina is quite sophisticated, far more than would be carried out by a camera and thus the retina is better analogized to a computer than a camera, though the photoreceptor layer is functionally similar to the light sensing elements in a camera. The results of the information processing that occurs in the retina are communicated to the brain through the optic nerve. The retina performs information processing to extract such features as direction of motion, changes in intensity, differences in wavelength of light, and edges and shapes. 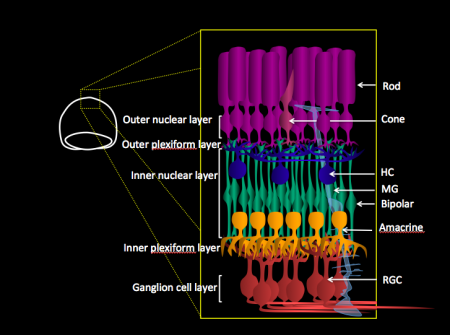 Figure 2. The arrangement of retinal cells is shown in a cross section. The neurons that make up the retina are the primary sensory neurons, the rod and cone photoreceptors, the interneurons (amacrine (AC), bipolar (B), and horizontal cells (HC)), and the output or macroneurons, the retinal ganglion cells (RGCs). The ganglion cell axons project out of the eye through the optic nerve to the brain. The Mueller glia (MG) span throughout the retina and provide support functions. The organization of the cell bodies of these cell types is as indicated, in the outer nuclear layer, inner nuclear layer, and ganglion cell layer, while the connections among retinal neurons takes place in the inner and outer plexiform layers. Figure from Santiago Rompani, with modifications by C. Cepko. 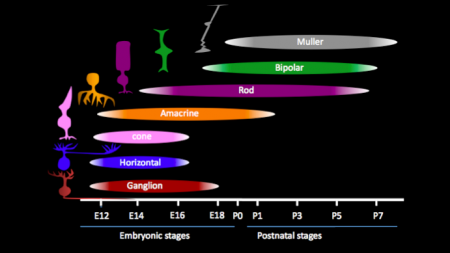 Figure 3. Retinal cells are born in a temporally conserved sequence. Each type of retinal neuron is born in a temporal window, with significant overlap in that several types of neurons can be born in the same time and place. Lineage analyses have shown that two different types of neurons can be generated in a terminal division from a mitotic progenitor cell (see cell fate determination).