We developed a lineage analysis technique based upon gamma-retoviruses, and have used this method to analyze lineages in several locations in the rodent and chick CNS (Price et al. 1986; Turner et al. 1987; Walsh and Cepko, 1992). In the retina, we discovered that the mitotic cells, or retinal progenitor cells (RPCs) are multipotent (Turner and Cepko, 1987; Turner et al. 1990). We have since been investigating the nature of these multipotent RPCs to learn whether there are distinct types of RPCs that make particular types of daughter cells or whether the environment or stochastic mechanisms guide the formation of different cell types. We used microarrays to profile the transcriptomes of individual RPCs and found a great deal of heterogeneity among them (Figure 1) (Trimarchi et al. 2008). 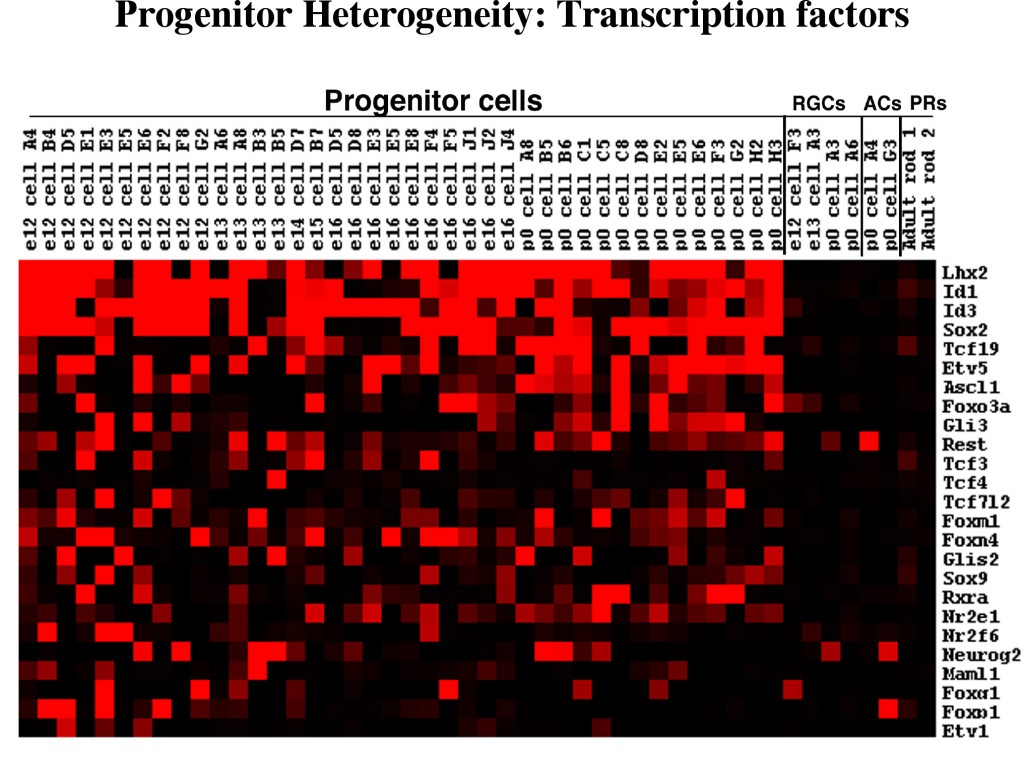 Figure 1. Retinal progenitor cells are hypothesized to undergo changes in their competence to make different retinal cell fates. The changes in competence are likely produced by changes in gene expression within retinal progenitor cells. To determine these gene expression differences, single progenitor cells, as well as single cells just entering their differentiation program, were used to prepare cDNA probes. These probes were then applied to an Affymetrix microarray.  The relative signal levels for a sampling of transcription factors are shown for RPCs and a few other cell types for comparison. The signals for each cell are shown in a column, and the genes depicted are represented as rows. The degree of signal is represented such that >10,000 is bright red, <1,000 is black and graded is 1,00-10,000. From Trimarchi et al. 2008.

To address whether the heterogeneity in progenitor cells was correlated with the formation of different types of progeny, we modified our retroviral tracing method to target specific progenitor cells. We found that retinal progenitor cells that express particular genes make distinct daughter cell types and have specific proliferation patterns (Hafler et al. 2012) (Figure 2). These data, in combination with data from several other systems suggest that the strategy used by the retina to make the >60 types of retinal neurons is very similar to that of the Drosophila ventral nerve cord (Cepko, 2014). Our goal is to continue to define the types of progenitor cells and the mechanisms that they use to generate the final complement of retinal cell types. For cell fate determination of rod and cone photoreceptors, see Photoreceptor Development. 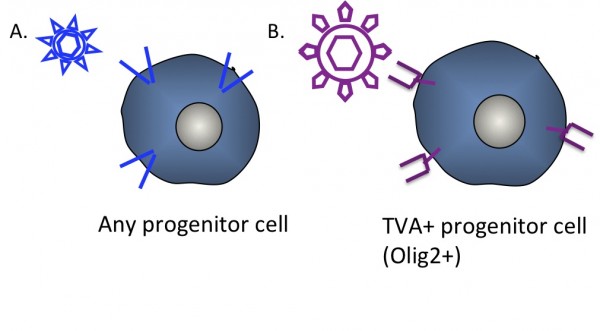 A. Retroviruses (gamma type) can only productively infect mitotic cells. When a retrovirus with a glycoprotein that is able to target any mitotic murine cell is used, there is random infection of retinal progenitor cells. These infections were found to produce a wide variety of clone types, with variation in both clone size and composition.

B. When a retrovirus uses a specific surface glycoprotein, the avian EnvA glycoprotein, only mitotic cells expressing the TVA receptor can be infected (Beier et al. Dev. Biol. 2011). TVA can be directed to specific types of cells using mouse genetics. In this example, those expressing the bHLH gene, Olig2, express TVA. The clones that derive from Olig2+ mitotic cells can thus be specifically marked and compared to the clone set from random sampling of progenitor cells (as in A) (Hafler et al. 2012). 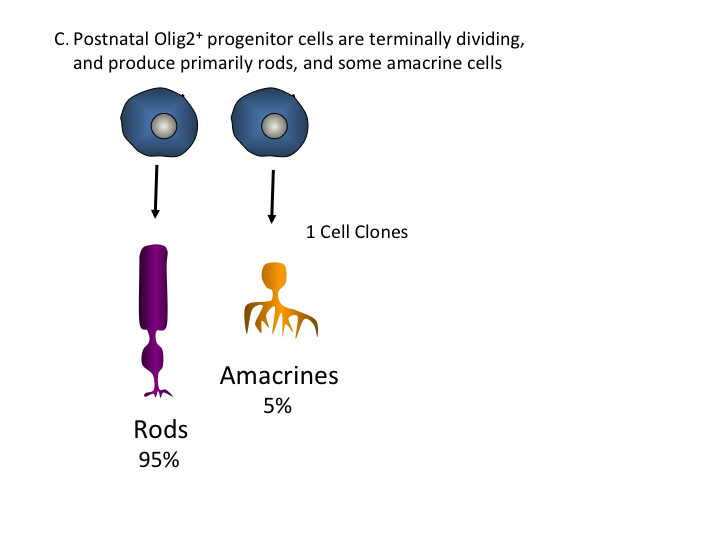 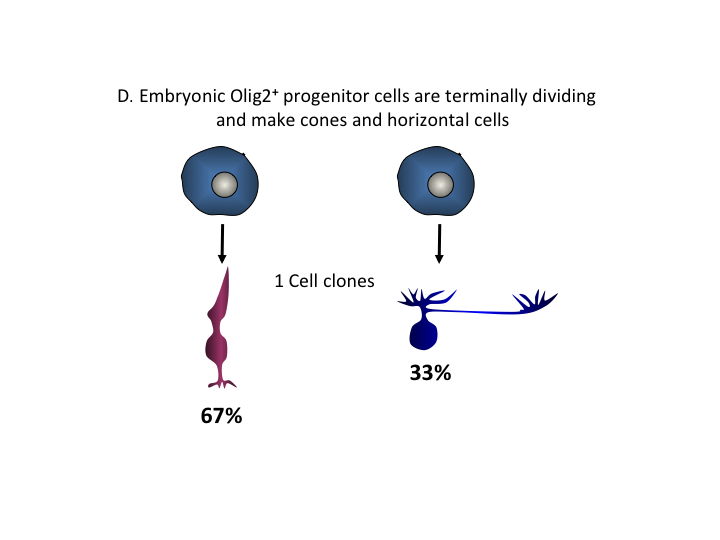 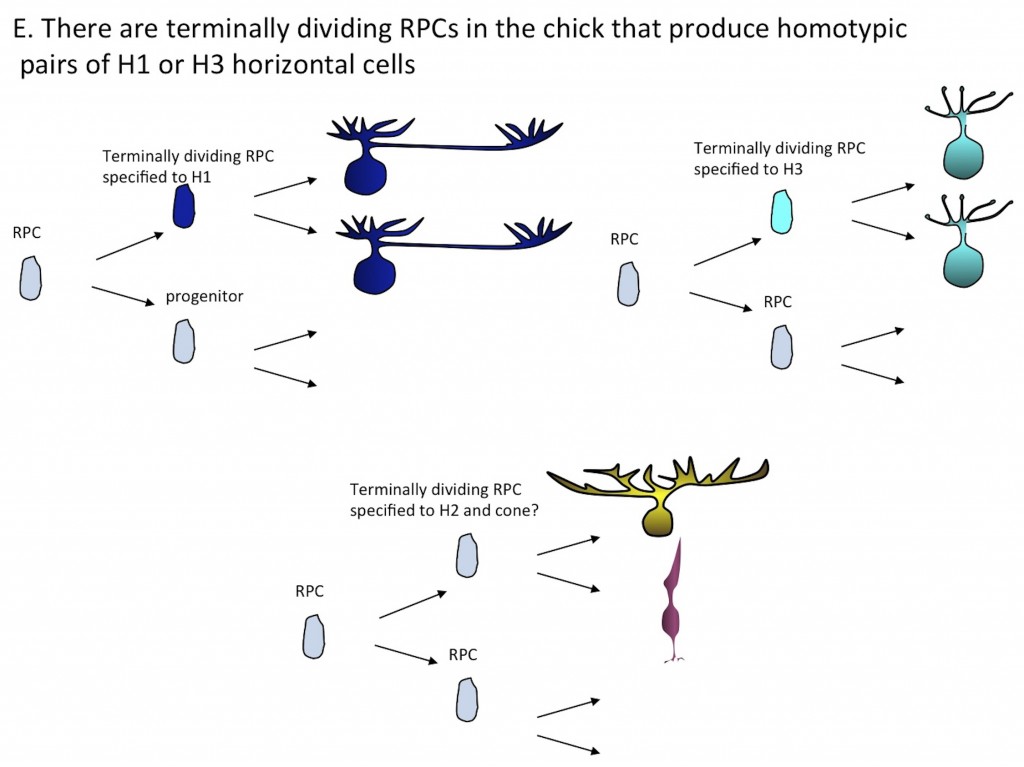 E. Lineage analysis in the early chick retina revealed that there are terminally dividing progenitor cells (RPCs) that produce homotypic pairs of horizontal cells. The chick has 3 types of horizontal cells which vary in morphology and patterns of connectivity. Type H1 and type H3 are produced as homotypic pairs from terminally dividing RPCs. H2 is not produced in homotypic pairs, but likely in an asymmetric terminal division with a cone as a sibling (Rompani and Cepko, 2008).

The Development of Photoreceptors

Rod and cone photoreceptor cells detect light and thereby initiate vision, with cones being responsible for high acuity and color vision during the day. The mechanisms that direct the formation of photoreceptors, including the choice of rod versus cone, have been a focus of our studies. Using the method of electroporation for mapping the regulatory elements of genes, we defined regulatory regions for multiple early photoreceptor genes. One of these regions led us to a specific progenitor cell type, and the transcription factors that are necessary and sufficient, for cone photoreceptor determination (Emerson et al. 2013) (Figure 1). We are using these genes to further understand the mechanisms of photoreceptor determination and the patterning of cones across the retina in different species. In addition, we have investigated the gene regulatory network that leads to the formation of rod photoreceptors vs. bipolar interneurons (Wang et al. 2014). Here, through mapping cis-regulatory elements, and the identification of the cognate transcription factors, we uncovered the interactions that lead to two different levels of Otx2, which then lead to the formation of rods (low Otx2) vs bipolar cells (high Otx2) (Figure 2). 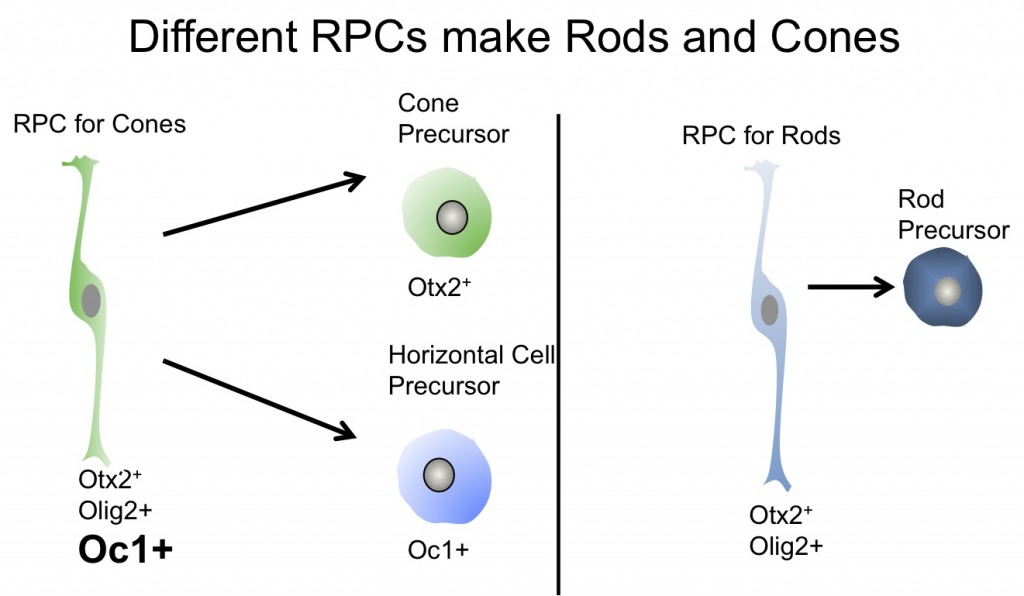 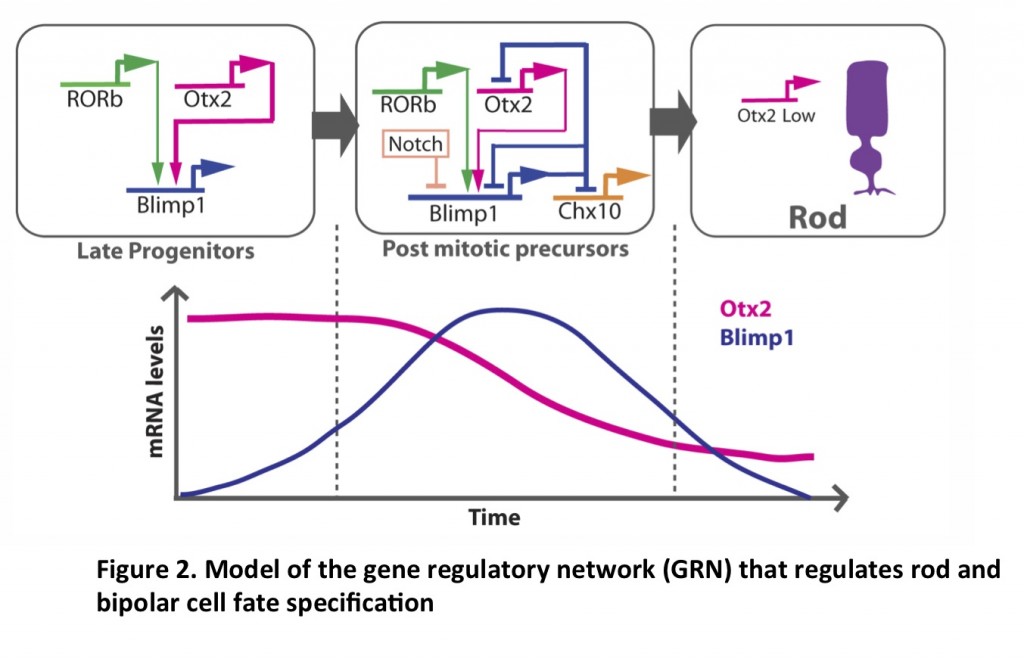 Figure 2. Model of the gene regulatory network (GRN) that regulates rod and bipolar cell fate specification. Several transcription factors (TFs) interact within newly postmitotic cells to drive the binary fate choice of rod photoreceptor or bipolar interneuron. These TFs directly interact, binding to each other’s cis-regulatory regions, to create changes in their levels of expression. The network’s output is the level of expression of the TF, Otx2, whose level determines whether a cell becomes a rod or a bipolar cell.

As a mitotic cell enters a cell cycle wherein it will produce a neuron, Otx2 and RORb begin to be expressed. They then turn on Blimp1 (aka PRDM1). As its level increases, Blimp1 represses the expression of Otx2, Chx10 and Blimp1. As a result, retinal cells with low levels of Otx2 adopt the rod fate, and those with high levels of Otx2 choose the bipolar fate. An additional regulator in this GRN is Notch, which inhibits Blimp1 (Mizeracka et al. 2013). Cells with higher Notch signal achieve high levels of Otx2 and Chx10, as they are missing Blimp1, which turns their levels down. Otx2 might also be a critical positive regulator of Chx10 in bipolar cells via a distal enhancer, the Chx10 2.5kb enhancer (Kim et al., 2008a).

How are photoreceptor patterns established within the retina?

The retina exhibits several aspects of patterning within the two dimensional sheet of cells of the retina. The most well-studied aspect of this type of patterning is the retinotectal map, the topographic map formed by the retinal ganglion axons with their target, the tectum. Several other aspects of the retina are also patterned. In most species, the photoreceptors are not uniformly distributed across the retina. In humans and birds of prey, there is an area of high acuity vision in the center of the retina. This area, the fovea, has only red and green cones in humans. Just outside of this area are the blue cones and all other cells that normally process the signals from photoreceptors. Very little is known about the mechanisms that direct the distribution of photoreceptors. We are investigating this at the molecular level using the chick as a model system. The chick has a rod-free central spot (Bruhn and Cepko, 1996) (Figure 1), much like the human fovea.

We are exploring the mechanisms of photoreceptor patterning from two directions: from a knowledge of the upstream patterning genes and from our studies of the determination of photoreceptor fate. Several genes that are expressed asymmetrically across the early retina provide a starting point for an understanding of how the central zone is designated to be the rod-free zone (Figure 2). In addition to these transcription factors, there are small molecules that may pattern the retina through interactions with their receptors. Retinoic acid (RA) synthetic and degrading enzymes are patterned along the dorsoventral axis, and have been shown to play a role in retinal patterning in fish and frogs. Thyroid hormone (TH) synthetic and degradative enzymes similarly are patterned in the retina. Work in mice and humans suggest a role for TH in retinal development, and more broadly in many developing tissues. We have been investigating the roles of TH and RA in formation of retinal pattern. As well, we have investigated the roles of several transcription factors in retinal patterning. The data so far suggest that a complex set of interactions direct the formation of photoreceptor pattern (See Schulte et al. 2005, Sen et al., 2005 and Trimarchi et al. 2008) 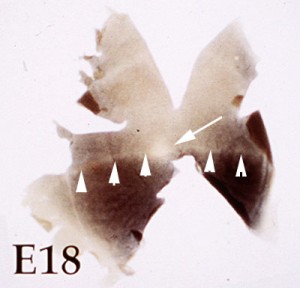 Figure 1. A chick retina from embryonic day 18 is shown. It is flattened to reveal the entire retina following hybridization with a rhodopsin probe. There is a rod-free central zone (arrow) and a rod-sparse horizontal stripe (arrowheads). The human fovea similarly comprises a central rod-free zone. 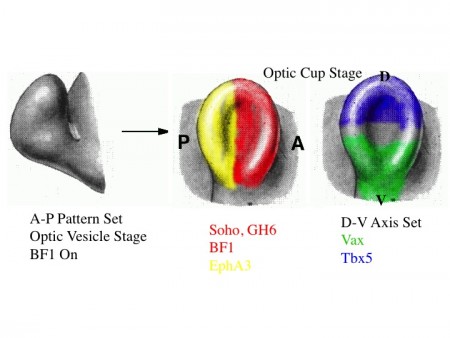 Figure 2. The chick retina exhibits both anterior-posterior (AP) and dorsal-ventral (DV) gene expression patterns early in development. At the optic vesicle stage, at about stage 10 in the chick, the AP axis is set and the winged helix gene, BF-1 (foxG1), is expressed in the posterior vesicle. When invagination to form an optic cup occurs, the DV axis becomes set. Several genes then appear and are patterned along the AP or DV axis. Soho-1, GH6, and BF-1 are in the anterior retina, while EphA3 is in the posterior retina. Vax is in the ventral domain, while Tbx5 is dorsal.