In many forms of human blindness, rod photoreceptors express a mutant gene, whereas cone photoreceptors do not. Unfortunately, the cones still die, implying a non-autonomous process in the death of cones. Humans rely most heavily on cones; therefore, we would like to understand why the cones die, so that a pharmaceutical or genetic intervention can be developed. To this end, we have used microarrays as well as other methods to examine several mouse models of human disease and found that the cones are starving subsequent to the death of rods (Punzo et al. 2009). We are developing AAV viral vectors to deliver genes that improve nutrition within cones, to promote their survival in a degenerating retina. In addition, we have created AAV vectors that fight oxidation within cones (Figure 1), which has been shown to occur in human diseases that lead to blindness. Finally, we found that the addition of HDAC4 preserved rods, and due to the lack of rod death, cone survival was promoted. We are investigating the mechanism of HDAC4 and developing an AAV vector for its delivery. 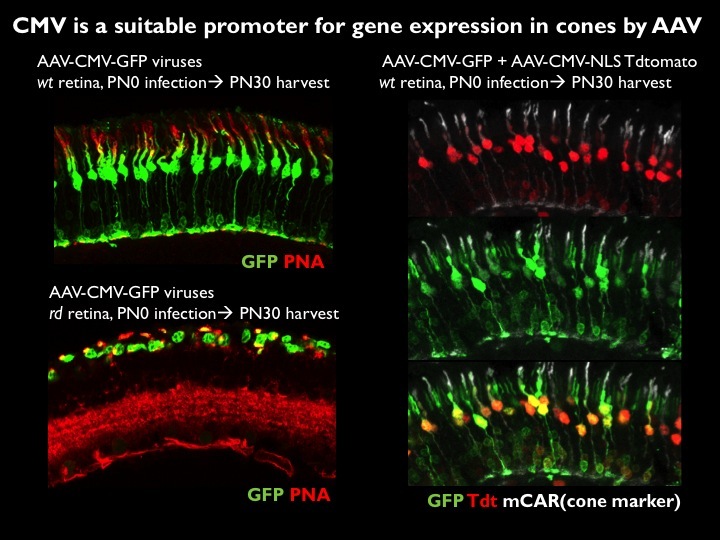 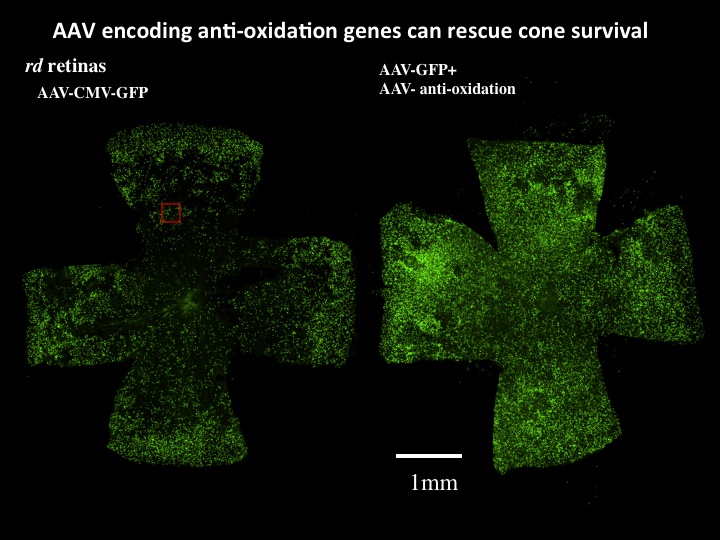 Figure 1. AAV can infect cones and drive gene expression to prolong cone photoreceptor survival. A. AAV can infect and express multiple genes in cone photoreceptors. AAV using different promoters to drive GFP were injected on the day of birth (PO) into wild type (wt) or retinal degeneration (rd) mouse models. Near complete infection of all photoreceptors was achieved. A ubiquitous promoter, CMV, led to high level expression in nearly all cones. GFP expression indicates successful infection, and PNA or cone arrestin expression indicates infection of cone photoreceptors. Co-infection using two AAV vectors, one encoding GFP and one encoding tdtomato, shows the high efficiency of these injections. B. AAV encoding anti-oxidation genes prolongs cone survival. AAV vectors encoding a variety of genes to boost metabolism and/or combat oxidation have been developed and tested on mouse models of a human condition, retinitis pigmentosa (RP). AAV encoding GFP was injected into the eyes of retinal degeneration (rd) mice at postnatal day 0, with sacrifice at postnatal day 50. To test whether the oxidation normally seen in rd retinas could be reduced and thereby extend survival, AAV’s encoding anti-oxidation genes were co-introduced into one half of the rd eyes. Shown are complete retinas, prepared as flat mounts, with each green spot representing a GFP+ cone. The anti-oxidation viruses prolonged cone survival, as is particularly evident in the center, where the control retina can be seen as almost completely devoid of cones. This treatment also prolonged visually guided behavior. Data and images from Wenjun Xiong.